At long last, the much lauded rewrite is done! OK, it's all but done. We're at a point where we're going to release a stable server and a fully functional web app. It's well tested and will keep data sacred. The look and feel is all we'll be tweaking for a few weeks aside from any bugs we might find. Want to see what it looks like?

I have some screenshots below taken from the development server. They're not final, but they're close. Like I mentioned before, we have all functionality done, but we're tweaking the look and feel, and this is likely to continue for many months, here and there. Subtle improvements should add a better experience and more support for odd devices. We tried to support phone browsers much better for instance, though some sections just don't feel right on a mobile device. (Real numbers are blurred to protect the helpful.)

Contacts in the old system could get cumbersome for quick edits, and it was inconvenient to manage numerous groups. We felt this limitation was holding us back in what we ourselves wanted to do, so we just went a whole different route here. It's very similar to the old one, but the groups are more condensed and easier to see many groups. Contact editing is also easier, just click the contact you want to edit. Done. Searching is more efficient, but that's more something the devs are proud of than anything.

Not much has changed here except that everything happens on one screen. Internet Explorer users will still see an error for playback, until something changes with their WAV file support, but every other browser we've tested plays them back flawlessly, as you'd expect. 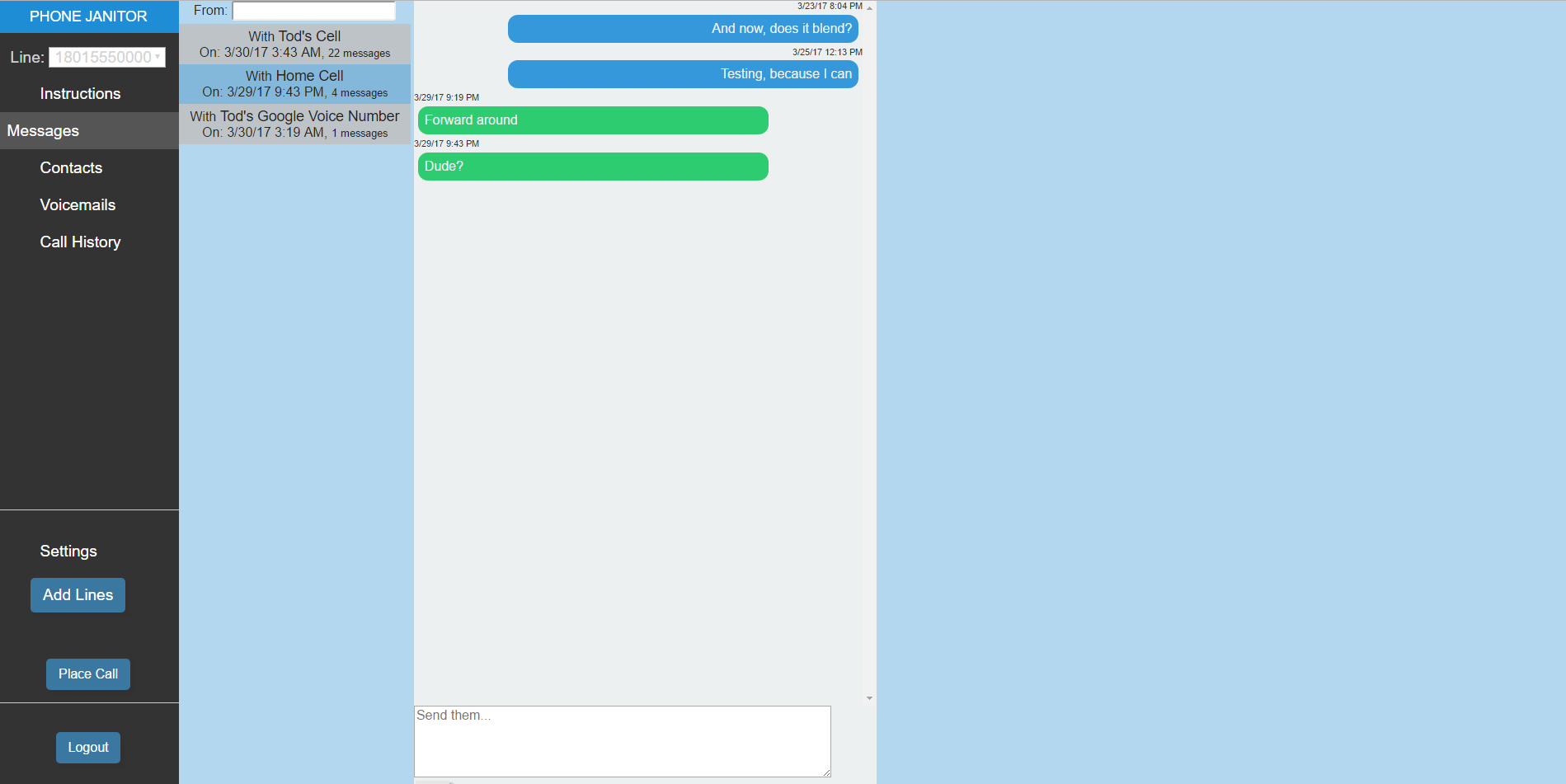 This is my favorite. In the old system, following conversations like you would on a cell phone was lacking, as a polite way to put it. We also noticed things got out of whack if you had too many messages. This was unacceptable for the new system. I've tested with thousands of messages. Plus, when you get a new message, it will snap you back to the bottom where it appears. So convenient. Please let us know what you think as you use it, as we would love to improve this area even further.

One of the most powerful things Phone Janitor offers is the Instructions the system is supposed to follow. We have made that experience even more accessible and editable. If you want to remove a single condition, you can do that now. (We removed the "add conditions" button for some testing, I promise it's there in the real deal.) Another bonus? The whole rule is draggable, not just the icon, which is thankfully missing.

One change is that editing rules is not saved automatically. This seemed to have confused a number of users and we're trying to make it explicit with the "save" button at the bottom. If you have opinions about this change, we'd love to hear them. Feedback@phonejanitor.com is always open to you.

So when does all this magical change happen? Why, this weekend of course! We're shooting for Friday late evening MST time. The system will be down for a bit then, longer than it ever has before and likely longer than it ever will be again. Inconvenient, but necessary. If it's not stable, we won't flip the switch until Saturday evening. So Saturday or Sunday morning you'll have the ability to access the app at the same URL you've always used. Feel free to let us know if you have any problems. We can likely get them fixed momentarily, depending on their severity. We're confident nothing major will come up, as we use this ourselves, so we've been very careful to keep it stable.

Next? MMS and starting the Android app!